Act in the Moment & Never Miss Out

Why It’s Better To Make Friends, Not Connections 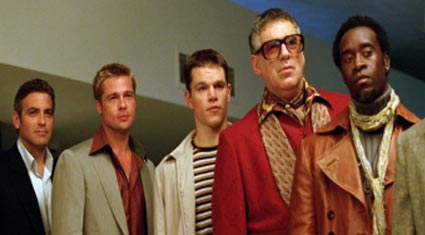 When I think of networking, I can’t help but gravitate to a favorite movie, Oceans Eleven. The movie’s fictional con squad may be an odd way to think about creating your own team, but The 11 perfectly exhibit the elements of the most profound connections:

First, they are friends: they know each other as people, not just job descriptions. Though their goals are important, their relationships last beyond whatever con they’re scheming. Second, they are professionals: they have great faith in one another’s skills and are allies in tackling the big problems. Individually, each member is an expert; together, they’re an unstoppable team. Third, they’re partners in crime: the trust the partners share is beyond reproach and, with their visions aligned, it’s truly The 11 against the world. Don’t cancel tonight’s business drinks in favor of pulling off a casino heist just yet, but consider the analogy: while most amateurs run-and-gun through networking events swapping business cards left and right, the best networkers are subtle and deliberate. They aim to build lasting friendships with those whose professional skills they can benefit from and whom they too can help. Then, when they meet others who share their vision, they nurture trust in one another by being consistently helpful. As the partnership gradually grows, they connect their new friends with the rest of their network, ad in the process, build their own unstoppable team. Beyond all the tips and tactics, three golden rules have been part of my most successful connections. Here’s what it takes to meet your next partner in crime.

There’s nothing like the feeling of having a friend who truly listens to your ideas and provides constructive feedback, versus a contact who’s mentally rehearsing his pitch while you finish your thoughts. It’s the positive influence of someone who helps you grow across many areas of life, versus one who only contacts you when you get a promotion. Being a friend means you’ll be on top of someone’s mind, rather than a LinkedIn search away. Rather than asking someone, “What do you do,” like everyone else that night, start with “What have you been thinking about lately?” Then shut up and listen. Dig into the why, and unpack their values, seeing how they compare to yours. Best, do it over lunch or drinks after the event: sharing food and fun lets a conversation spill over into life as well as work. Most importantly, create opportunities to get to know each other better across different contexts after your first meeting. In a given week, I’ll work out with a business mentor, invite some new friends to a startup event, and invite colleagues to a party to escape their routine. Every contact point brings these connections closer, and the diversity of experiences means we’ll get a fuller picture of one another.

So you’ve finally met a great potential connection, and as you already opened with a question less common than, “What do you do?” how do you end on an equally positive note? With everyone else at an event out for something, what if, instead of asking about how your new friend could help you, you ask how you could serve them? Try asking, “How could I help you right now?” If your experience is anything like mine, you’ll see their barriers melt away – if they don’t ask you to repeat yourself first.
Though some new friends won’t immediately be looking for something, there will still be things they’re curious to learn or people they’d like to connect with. Teaching them something or making an introduction will make all the difference. After the event, send a follow-up with some of your favorite marketing resources, an introduction to a friend they’d click with, or even a cafe suggestion. After all, these random acts of kindness are one of the key building blocks for building lasting connections are built on, say researchers.

Ever hear of the PayPal Mafia? It remains Silicon Valley’s most powerful networks, comprised of luminary founders, investors, and technologists like Peter Thiel, Reid Hoffman, and Elon Musk. Each member is a super-connector, but what makes them a true mafia is the amplification effect: each member enjoys many of the successes, new resources, or connections one makes. Consider, for example, the people Hoffman considers colleagues – Secretary-General of the United Nations Ban Ki-moon; the minister of cabinet affairs of the United Arab Emirates; President Obama. It’s not by chance that Musk, Thiel, and other PayPal Mafiosos hang out with the same crew – it’s by proximity. In this way, the Paypal Mafia doesn’t just network – often with the likes of presidents and prime ministers – but rather, they interconnect. By interconnecting your network, you’re building a web of personal and professional connections, and placing yourself in the middle. When you become a habitual connector, the value you can offer a new member of your network extends to the know-how of your entire web. When you build a reputation for consistent and useful introductions, your anxiety to network evaporates, and your best new connections begin to come to you rather than needing to be sought out. If the secret to loving one’s work is to make it feel like play, the secret to making great networking connections is to make friends instead. Rather than adding one more “what do you do” to the evening, approach a networking event as a search for co-conspirators: make connections that are friendly, professional, and – by taking the interaction deep rather than broad – meet your next partner in crime. When you’ve got your heist squad locked in, you’ll know you’ve mastered this game.